On Sunday I shared this edited photo for Black and White Sunday of Luke hiding. A few readers figured out that he was in his agility tunnel, but who or what was he hiding from? You can barely see it in the photo, but he has a ball in his mouth. He took his ball into the tunnel to hide from ME.

That’s what our “new normal” is – my dog hides from me because I want him to play ball! We’ve come a long way from the days when our ball-obsessed beagle drove us nuts wanting to constantly play!  I now know exactly how Cricket felt when she ruled the ball games, and Luke wouldn’t give up the ball to her for another throw.

How pathetic is a dog Mom who is trying to pry a ball out of her dog’s mouth, or begging him to give it up, while saying a variation on this chant: “Come on, Lukey, give me that ball so I can throw it. Don’t you want to play with me? Kiss…kiss…kiss” (he will sometimes respond to “leave it” or “give”, but I can’t overuse those commands or they’ll no longer work). I shared before how Luke and Sheba are not much into playing fetch with their team captain, Cricket, unable to play.

We’ve added some walks to our regular routines, but I still like to spend some time in the yard playing. It’s really come down to the fact that I’ve had to take over Cricket’s job of retrieving the ball! Both Sheba and Luke will chase the ball – at times – but most of the time I have to go to them to get it back to throw it again.

Sometimes Sheba will bring the ball back; with a lot of coaching. Luke would rather play keep away, which is fine as long as I can keep him moving and getting some exercise! But as seen, he will sometimes hide from me!

Luke loves balls but sometimes he just has no interest. I keep trying different things – sometimes if I toss the ball up and down catching it, that will pique his interest. Sometimes he prefers just catching it if I toss it to him, instead of chasing it. If I throw it from behind the bushes on the patio, or if it hits the tunnel or the fence that is more exciting, and if it goes out of the fenced in yard – that is especially exciting. Except of course, I’m the one that has to go get it, and the gates on our yard are not all in yet, so I have to walk all the way around most of the time.

They have been having a lot of fun with the tunnel lately though. I’ve had that in the yard pretty much ever since we moved in. At the old house, I only took it out occasionally. It’s just a cheap tunnel, so it’s taken being out in the weather pretty hard, and we’ll have to replace it next year. I’m hoping to find a tougher one that won’t cost a fortune. It’s easier to just have it out all the time, and that way they can play (or hide) in it a lot more. 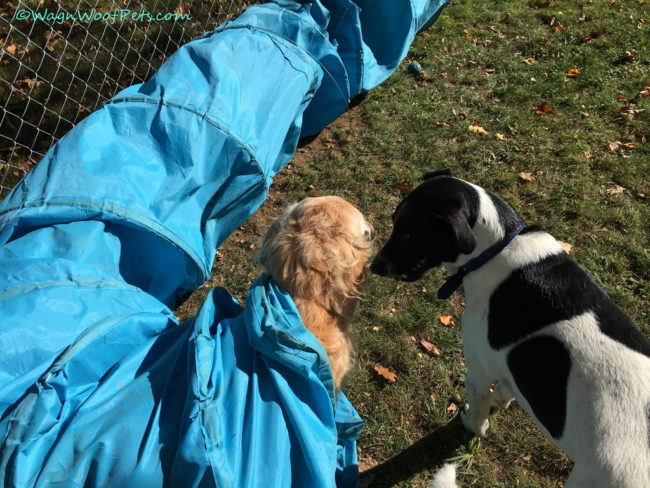 I used to have it tied to the fence but all the ties have broken. So now the wind blows it around, which is what seems to make it even more attractive. One time when the Dadz was spraying the yard for fleas and ticks, he moved it to the patio. When the dogs were able to get back outside, the first thing they all did was to go into the tunnel, and it was still folded up on end! 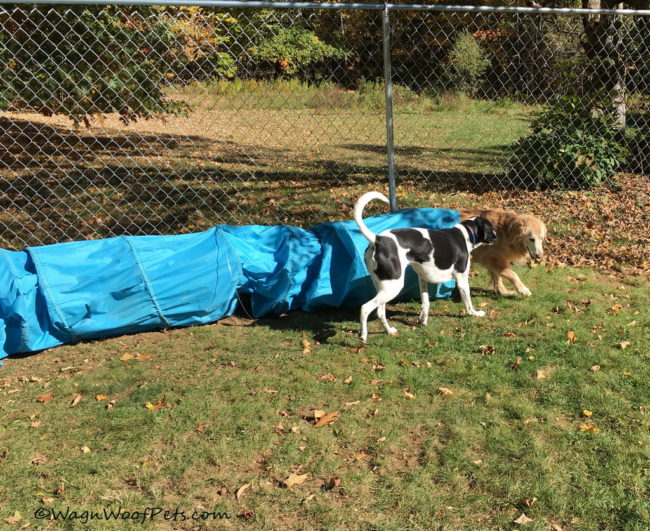 I’m pretty sure I’M the one getting the most exercise, I’m the one sometimes taking 3 walks/day, I’m the one chasing the ball, or setting up nose work games, and I’m the one exhausted at the end of the day, especially if I do my jog in the morning as well, which is something I do for me.  But before it was Cricket getting all the exercise, so I guess things really haven’t changed all that much for Luke and Sheba. I’m the one trying to adjust to the new normal.

I want to mention also that Cricket has been doing better! Even though she’s not playing ball, and still stumbling a bit here and there; she has been more active, playing with toys in the mornings and spending a lot more time outside just exploring the yard. That tells us that she is not in as much pain, and she seems smart enough to know what her limits are (most of the time).

The reality is that there’s probably not much reason to get used to this current normal anyway. Sheba has already been with us far longer than expected, and even though we have high hopes that will continue, we know that could change any day. Winter is coming as well, and that always jumbles up the routines. Even though dogs love routine, it turns out that maybe in this household it’s the Momz that loves it even more.  I’ll be OK as long as they’re OK, even if I do feel like sitting down and crying when no one will play with me.