Our beagle Kobi was born in October of 2000.  We first met him at my husband’s brother’s home at Christmas of that year.  He was their new puppy, and the life of the family Christmas party.  They had a family of four growing boys, and when at another family party the next Summer, my sister-in-law told me they had been trying to find another home for Kobi; they just felt they weren’t giving him the time and attention he needed.  Then it occurred to her that we should take him.  At the time we had only one other dog at home, Maggie.  We promised to think about it and before the two hour drive home was over, we had decided we would take him, as long as he and Maggie hit it off.  That they did, and fabulously.  Kobi’s first family was heartbroken when they left him with us, but they knew it was best for him.  He quickly settled into our home and he and Maggie became best friends. 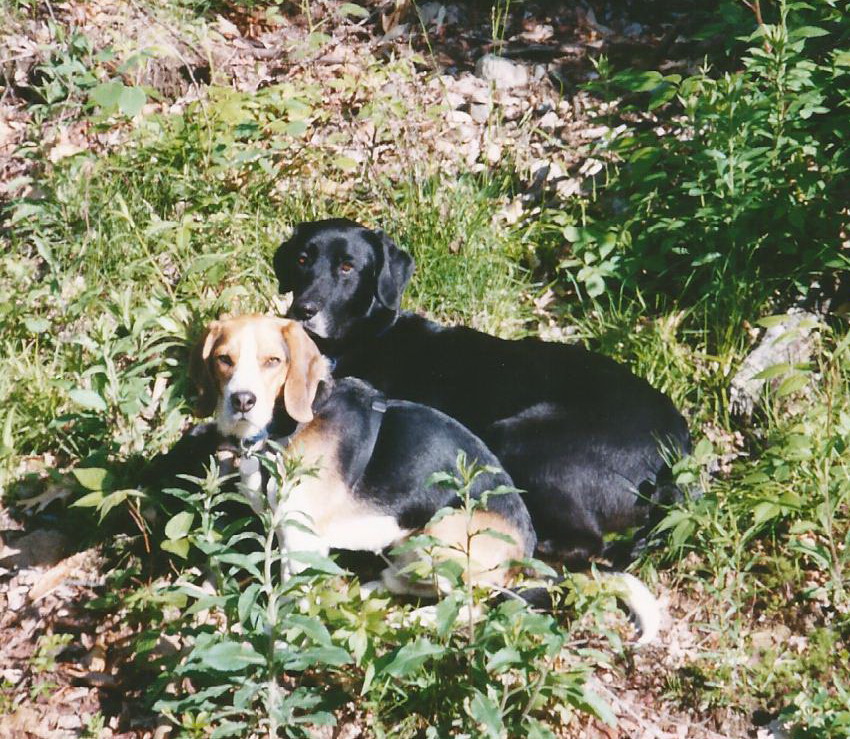 Our now family of four often went hiking, camping, and boating back in those days, and Kobi loved all of those things.  He was a bit of an escape artist back in those days also, before we had the fenced in yard for them to play in.  For some reason he always ended up at the same neighbor’s house.  He had a collar with our phone number on it, and while we were frantically searching for him, the neighbors would call.  The next time they just loaded him up in their car and brought him home. Eventually we learned not to let him escape; and as he’s gotten older he doesn’t want to wander off much anyway. 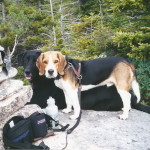 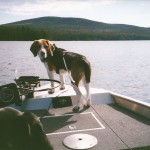 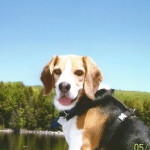 Kobi has always been a friendly dog who just loves everyone….human, cat, dog.  He is the most easygoing dog ever.  Nothing scares him.  You could run him over with the vacuum cleaner and he won’t move.  The only thing that ever bothered him was the smoke detector, ours has a lady’s voice that says “fire fire fire” and he hates that.  He learned that it would go off when we used our oven.  One day I had turned on the oven and poor Kobi was over in the corner cowering and shaking.  He had made the connection between the two things!  In time, we’ve learned how to use the oven without setting off the smoke detector, so the oven no longer scares him either.

One other thing he hates is having his harness put on.  When he was younger, we had to use a gentle leader on him, because he was such a puller.  He quickly learned how to look totally pitiful when we put it on him.  He would squint up one eye and manage to look pathetic.  Now that he is older he doesn’t pull so much.  We use just a regular harness but he still hates it.  Once it’s on though, he is fine.

Walking is one of his favorite things to do….I have written about that in my post “Walking the Beagle”.  Other than that he mostly likes to eat and sleep.  As he’s gotten older, he sleeps very deeply.  Once in a while he’ll scare me when I talk to him and he doesn’t even move.  I have to go up and make sure he is breathing!  He seems to be getting a little deaf too and I think that helps him to sleep so soundly.  My favorite thing about Kobi is that he is constantly with me when I am home.  If he’s not sleeping, he is following me from room to room; and he will quickly lay down in whatever dog bed is closest by and wait for me.  Then he’ll follow me wherever I go next.  If I am working at home, the other dogs might be outside playing or just hanging out, but Kobi wants to be inside with me.  Even though he loves the outdoors, he’s always been kind of an indoors dog.  When we used to camp, in the evenings my hubby, Maggie, and I would always be out by the campfire, but Kobi would want to go in the camper!  He would jump into the chair right by the window, from there he could keep an eye on us.  During the day at camp though, his favorite spot was on the lounge chair, especially with Dad: 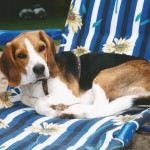 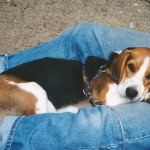 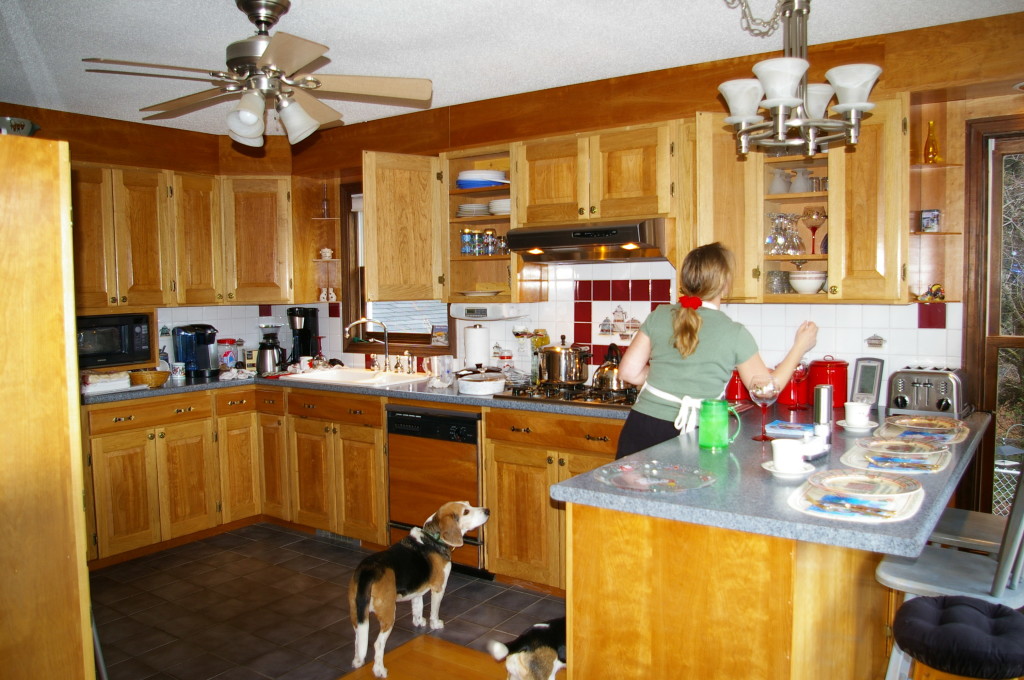 Of course, his favorite place to hang out with me is in the kitchen.  I pretty much can’t be in the kitchen without him being underfoot.  I call him my “assistant chef Kobi”.  He is really not a beggar though…he doesn’t whine or carry on, but he just waits patiently, knowing eventually something will come his way.  The only time he barks is when his meals are getting dished out; I’m not sure if he’s afraid we’re going to change our mind about feeding him, or if we’re just not going fast enough!  It’s a good dinner bell for the other dogs though – if they are outside they know when meal time is! 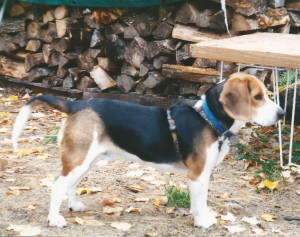 Kobi is a purebred beagle, and he came from a good breeder.  He would have been considered show quality, if they hadn’t discovered that he had an overbite!  For that reason, hard treats don’t keep his teeth clean like they do with other dogs.  We usually have to have his teeth cleaned at the vet yearly; I have tried brushing his teeth, but for some reason this dog who will eat pretty much anything hates every single type of toothpaste I have tried on him.  He is good about going to the vet though.  This last time we took him, and he also had some lumps removed, the women at the vet’s office couldn’t stop raving about what a good boy he was. 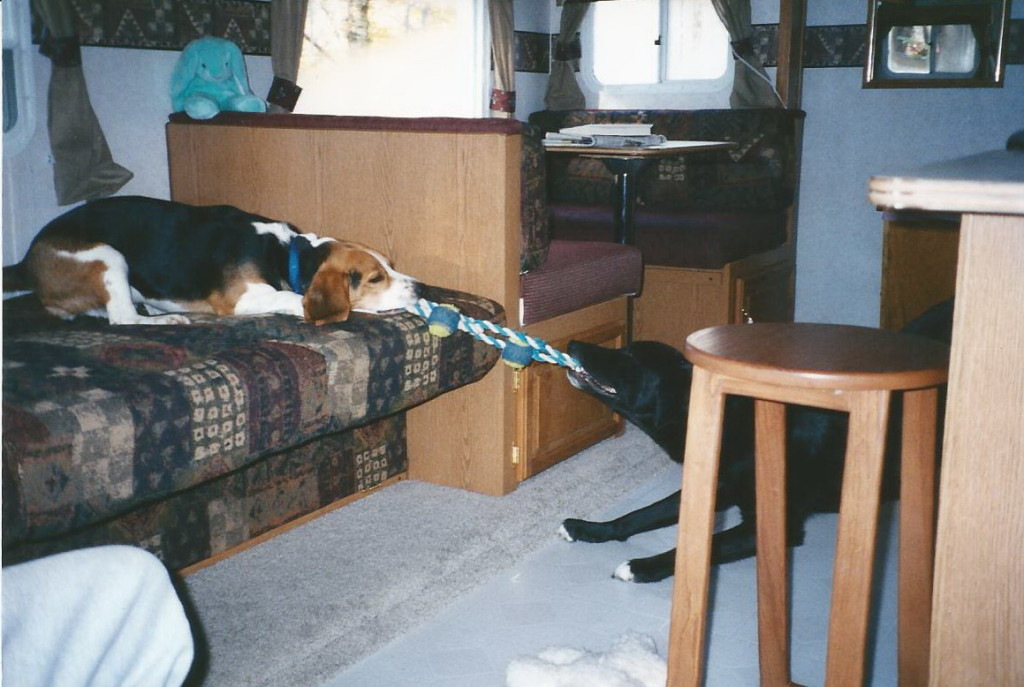 Kobi took it hard when Maggie went to the Rainbow Bridge, when he was not even 4 years old.  They were so close and he was devastated when we lost her.  Our neighbors loved him to pieces, and vice-versa, they used to take care of both him and Maggie, so they helped us during the transition time while we tried to find him another companion.  He could not be left alone; sometimes we would take him to work with us and the neighbors would pick him up there after they had gone to church.  Later, when he had Cricket as his new companion, and they became too elderly to care for him all day, we would still take him over and let him just hang out there.  They have also been gone for years now, but when we walk by their house, he will still pull over that way hoping to see them.

Kobi is just such a good, quiet boy most of the time.  Sometimes I lose track of where in the house he is because he is so quiet.  But rest assured, if it is 5am or 5pm, he knows when meal time is, and he is up and in the kitchen, or trying to herd Mom or Dad towards the kitchen.  He doesn’t whine or carry on, but he just sits and stares at us until we figure out what it is he wants.  He has a pretty good inner clock – he even knows when treat time is – we give them a treat around 3pm when we get home from work; on the days we are home he also knows when 3pm is.  He doesn’t beg at meals, because he knows when we are done he will get to lick the plate, or get a treat afterwards, or both.  He always holds us to that too!

One other thing Kobi loves to do is ride in the car!  When I had my pet sitting business I would go to the bank one day a week, and he always came with me and would be so excited to go through the drive through where he would get a treat.  He also loves to go to the dump with Dad!  Sometimes he gets treats there too.

Kobi is remarkably healthy for his age.  I am careful not to over exercise him, but he is still spry as a puppy on our walks.  Just yesterday we took our first walk since his last surgery, and he was happy as a clam to be out there.  He trotted along, tail wagging, nose to the ground, and he was in heaven.  I was pretty happy myself to see him back to his old self, and I hope he will be feeling this good for a long, long time to come.