This week we are happy to be joining the Monday Mischief blog hop, hosted by My Brown Newfies, Alfie’s blog, and Snoopy’s Dog Blog.

One day last week I was down in our garden area picking some of the last fall vegetables.  Sheba was exploring and Cricket was chasing the ball.  Kobi had stayed in the house.  At some point I heard the porch door slam….Kobi had let himself out.  Both beagles let themselves in and out through the porch when the door from the house is open.  I saw Kobi up on the deck, and then went back to what I was doing.

I did some watering in the greenhouse and a little more wandering around the yard looking at the gardens which are now winding down.  Eventually I went back into the house and back to the computer.  I wasn’t there long before I realized Kobi wasn’t in his usual spot in his bed under the desk.  Then I remembered he had let himself outside, so I just went to check on him and see what he was up to.  At first I couldn’t find him.  Then suddenly I spotted him down in the vegetable garden!  There is a gate between the garden and the dog pen.  The dogs are only allowed in the garden when we are there.  We want to be sure they aren’t trampling things, and the fence surrounding the garden is much lower so they could conceivably jump it.  Not that Kobi would do that, at his age!  I always close the gate when I leave, so poor Kobi was stuck in there for a little while!  When I went down to get him, he hadn’t even noticed….here is what he was doing: 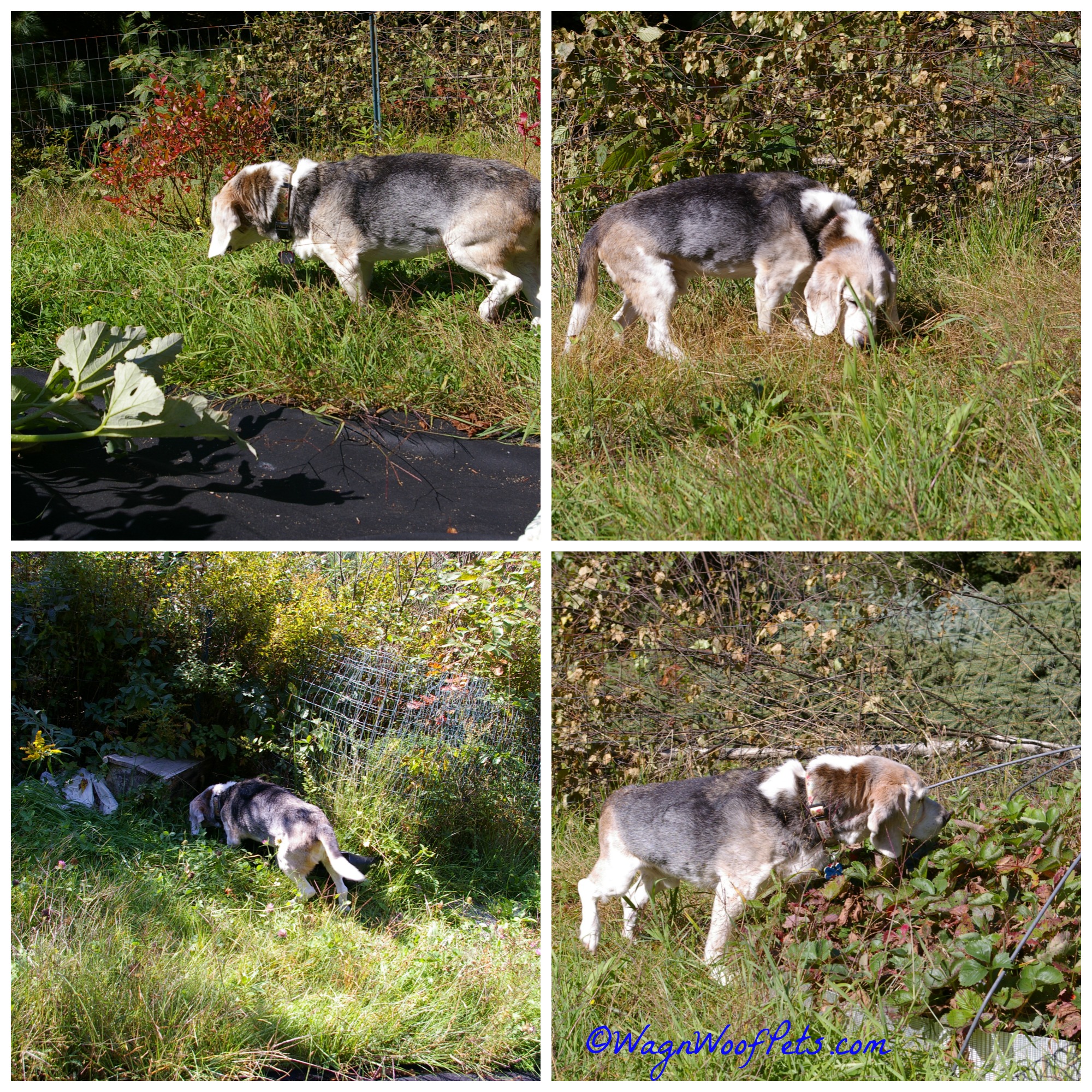 Does he appear to be hunting for something?

Kobi was so preoccupied with his hunt, that he never even knew that I had lost him….well, let’s say misplaced.  Kobi is so quiet and sleeps so much now, that this wouldn’t be the first time I misplaced him.  Usually it’s inside the house though.

Oh, would you like to know what he was hunting?

Kobi absolutely loves to hunt grasshoppers.  He will even do it when we’re out on walks.  Kobi is almost 13 years old now, and he doesn’t do much other than eat and sleep, and of course he enjoys his walks.  It really makes my heart happy to see his tail wagging away when he is trying to flush out a grasshopper.  The only thing I don’t like….he eats them!  I guess that’s ok though, grasshoppers are a delicacy in the Oaxaca region of Mexico, and they are apparently high in nutrients, including protein.  They don’t eat them raw though, but I guess Kobi doesn’t need his cooked!