We haven’t participated in the FitDog Friday blog hop for a while now.  That is not because we’ve been slacking off in the fitness department, but just because we got settled into our routines and didn’t really have anything new to report.  Routines are great, but routines can get boring too.  Luckily for us, we live in New England, where the changing seasons are always here to shake ’em up.

We did have a bit of a slow spell in our workouts when the weather turned cold, raw, and damp.  It seemed like the sun never shone except for on the days when I was at work all day.  I did have a bit of a motivation issue with getting out and walking.  Everyone was still getting walks, just not as many.  The girls had a lot of time in there when they were playing fetch in the yard.  Cricket came in 3rd in the senior group over on PetsMove for the month of November, so we couldn’t have done too badly!

The Thanksgiving holiday did interfere some also, and when I got out for a good walk with Kobi this last weekend I realized how much I had missed being out more.  It was a brisk day, but we had at least a small amount of snow on the ground which really brightens things up.  It felt good to be out in the fresh air.  Deer hunting season with rifle was over so we could walk down to the Christmas tree farm again.  It was a fun walk as there were people out and about going to get their trees for the holiday.  We talked to two gentleman who were cutting greens for wreath making.  It was interesting to hear that they had already sold over 500 and were planning to make 100 more!  Cars passed us and slowed down to ask where the tree farm was.  Kobi wanted to see everyone in every car that passed.  We had an elderly neighbor who recently moved away.  He used to carry treats in his car and stop and give the dogs one when we saw him.  Kobi has not forgotten this, and is still looking for that nice man!

My walk with Cricket this week was different, since it started snowing as soon as we got out the door.  It was cold but not frigid, and Cricket just shook the snow off….it didn’t phase her at all.  With a bit of snow on the ground, we’re able to use our woods paths again and stay off the main road to avoid the salt which can bother the dogs’ paws.  The Christmas trees looked beautiful covered in snow, and the pond is frozen over now.  The scenery has changed and that is so enjoyable! 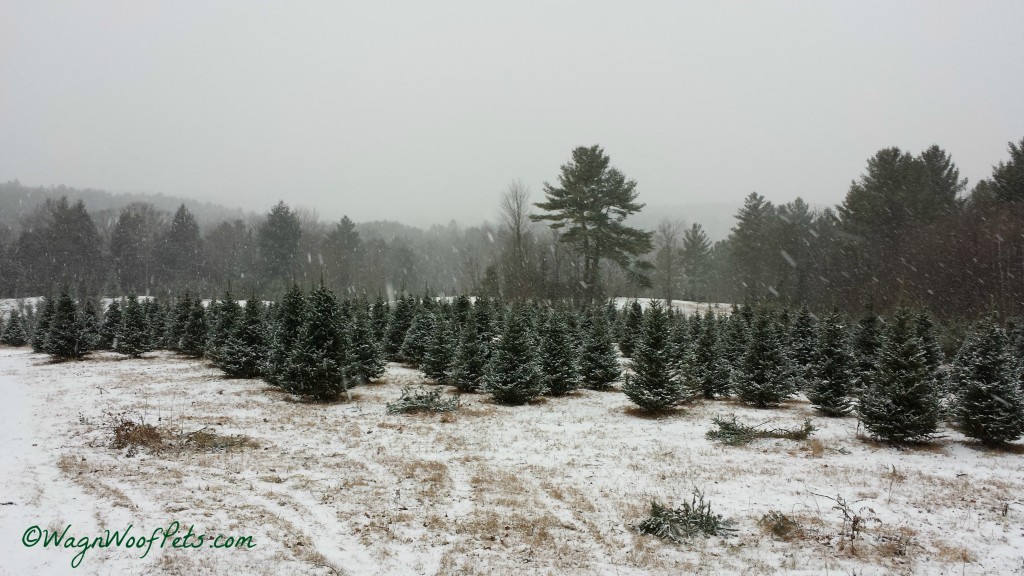 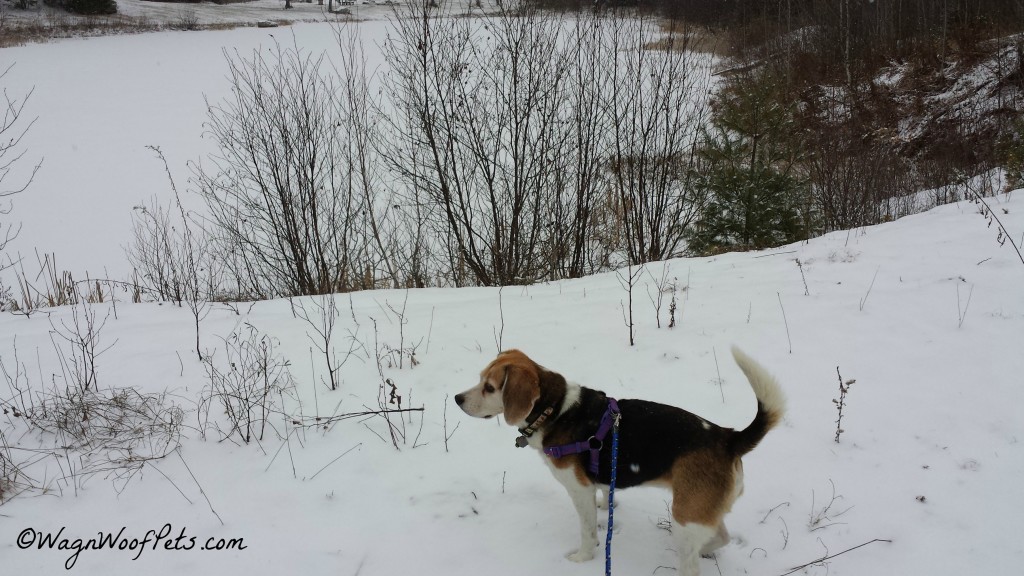 It was Sheba’s turn on my next day home and the weather has gotten much colder in just two days.  We woke up to only 4 degrees, and it reached just over 10 by late morning.  There was a slight breeze but we still ventured out.  I actually checked a wind chill factor graph on line to make sure it was safe to go out.  This is significant for me, because in the past, if that was questionable, I simply would have stayed indoors!  Sheba trotted along and did great, we kept it fairly short but we stayed warm enough.  She did, however, get some snowballs on her paws, so I think I am going to pick up some Pawz for her to wear next time (you can see in Kobi’s photo that he always wears his on his back paws).

We’re hoping for more snow soon, we need a significant amount so I can get my snowshoes out and we can really blaze some trails in our woods and be able to walk there too.  We avoid those trails in the summer because there is so much brush around and there are too many ticks.

I know some of our blog friends in the Mid-west/Great Lakes region have been experiencing some bitter cold and I think that’s headed our way.  Therefore, we have some plans for indoor activities.  Today Cricket played fetch for about 15 minutes outside, and then another 20 in the stairwell indoors.  She doesn’t love the cold when it gets under about 20 degrees, but loves to play inside.  Going up and down the stairs is great exercise for her!  I may even go up and down with her sometimes! 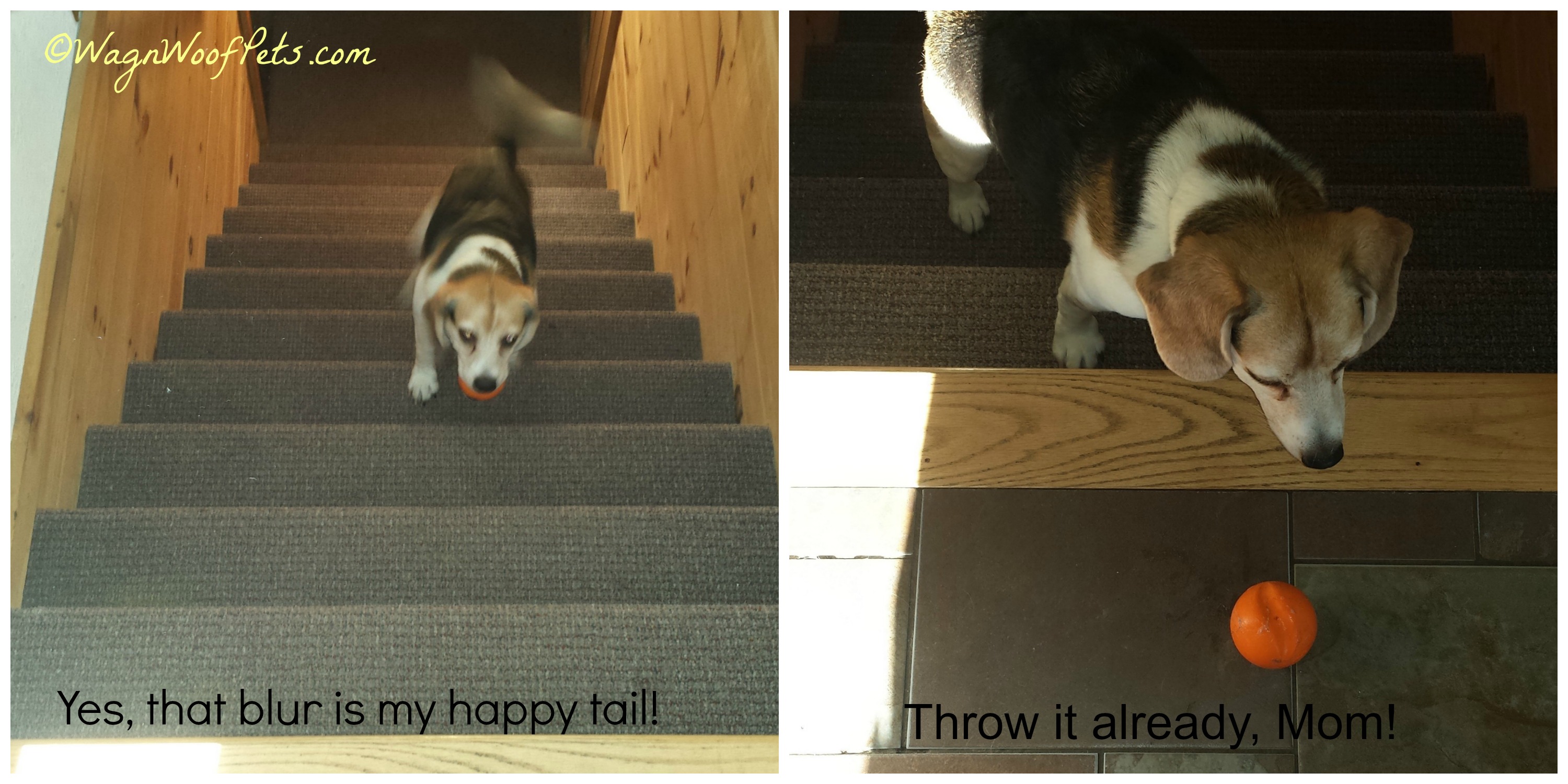 Sheba has just started learning “SlimDoggy Squats” to help strengthen her back legs, and Cricket is starting to get to know the balance cushion.  We have our new Dog Twister interactive game we won, and we are saving “Sniff School lessons” that Donna at Donna and the Dogs has been sharing about K-9 nose work.  We are doing it just for fun, but that is something dogs can compete in also.  Those are just some of our ideas, and we’ll be sharing more about them this winter.  We also have a new puppy joining the family and we know that will shake up the routines for sure!  I really hope he will liven up the girls and get them to play more.

By the way, in my last post about our new puppy Luke, I told you he was coming home in 26 days.  Well, the rescue was able to move up the transport so that he will be here on December 22nd!  He will be 8 weeks old then and ready for his new home.  So you’ll be hearing more about him sooner than expected!