It’s been a rough winter here for a lot of reasons.  There’s been the crazy New England weather; ups and downs from huge snowstorms to bitter cold to warm spells followed by cold spells leaving a big icy mess.  Of course, losing Kobi was the worst, and we’ve also had household issues that I won’t bore you with.  The bright spot in all of it has been Luke joining our family, even though it was a crazy winter to have to spend so much time outside with a puppy.

We’ve spent I don’t know how much time at our vet’s office, between Kobi’s illness and Luke’s puppy shots (we spread them out so that means more visits) and minor illnesses.  On top of those things, both cats and Cricket were due for their annual exams.  Believe it or not, that’s where our pleasant surprise came in.  Let me give you a little background first:

Last May I wrote a post for the Show Off Your Dog’s Waistline and FitDog Friday blog hops where I showed pictures of Cricket appearing a bit on the heavy side.  My wonderful commenters confirmed what I thought…that she was just a bit overweight and we needed to nip it in the bud before it got out of control.  When we took her to the vet that February, she weighed 26.2 pounds.  My goal was to get her down to 24 pounds.  The plan was to cut back a bit on food and treats, as well as upping her exercise program.  She started running with me and everything was cut back on.  I weighed her weekly but by the end of July she still weighed 25 lbs.  I was frustrated at not being able to meet our goal and stopped weighing her at that point, though we still kept up with the plan of action.

So when we took her this year, it was totally unexpected  to see her weigh in at 22.9 pounds!  With everything going on, I hadn’t really been paying attention to how she looked lately, but now we realized she was looking like her old slim and trim self again.  In the middle of winter, no less!

You can see the difference, right?

So why, we wondered, did she all of the sudden surpass the goal I had for her?  I might credit two things:  1. we had switched food, and we started using the SlimDoggy widget (seen in my sidebar) to calculate the correct amounts to feed her.  2.  We got her a personal trainer, seen below: 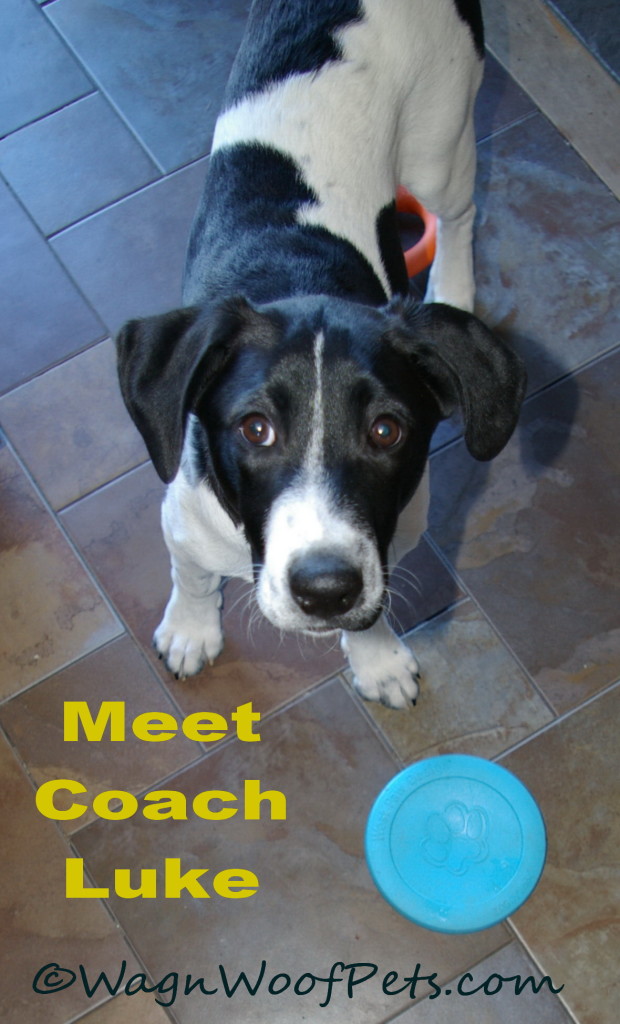 When Luke joined our family and got settled in and accepted by his siblings, we were excited to see both Cricket and Sheba playing more, and doing things they hadn’t done in a long time.  However, it didn’t really occur to me that this would be so beneficial to their health and fitness.

Luke has a workout program designed for them which includes:

We played a lot with the girls before he came along but not every day, especially if it was bad weather.  With puppy energy to burn off, you just can’t skip days.  The photos below show him putting them through some of their paces:

Another bonus:  at the same time we went through that with Cricket last year, our cat Samantha was up to 10 pounds, and for a tiny cat that made her pretty chubby.  At her appointment last week, she weighed in at 8.7!  I believe her weight loss is for the same reasons as Cricket’s;  new food in set amounts and a puppy that often keeps her moving…Luke thinks she should play with him just like the dogs do!

It will be interesting to see where Sheba weighs in at her next appointment….and even though Luke has me moving more as well, I’m not going anywhere near that scale, not for a while anyway.  🙂  Next week we’ll share more about what we’ve been up to for exercise other than playing in the yard and the snow games I’ve already shared.  I am hoping to be able to share some new videos of Luke doing some training too!