It’s been a challenging year with our vegetable garden. All our summer rain has the weeds growing completely out of control, and as often happens, I simply gave up trying to keep up with them. There just weren’t enough dry hours to get out into the garden, and it felt like a losing battle when I did get out there. Therefore, I did what I could and hoped for the best. Now we’ll just be clearing out when we need to get to the plants!

In spite of that, we’ve still been getting a few vegetables. Because our summer was not just rainy but cool, the snap peas just kept going and going, though they’ve come to an end now. I didn’t plant our usual beans this year, since I’d made a deal with another farmer that I would buy some veggies from her to sell at my shop, and for our own use. I planted excess carrots and potatoes instead, since we use a lot of those ourselves, and they are harder to find locally. I did have a few yellow bean seeds left over from the previous year though, so just decided to throw those in the ground. Some plants came up, but they didn’t grow very tall, probably due to the up and down temperatures early on. Surprisingly, they did still produce some beans, enough for a couple meals though I don’t think they are going to do much more than that.

When I was a kid, we always called the yellow beans “wax beans”, but we only ever got them in a can! I’ve also heard they can be called “butter beans” in some parts of the country, which sounds much better than wax to me! Here is the variety I planted, and you can see they are called simply gold bush beans. I think calling them yellow makes the most sense since the green variety are only called green beans! 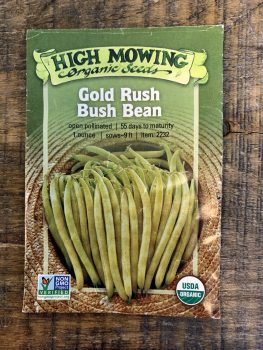 I wanted to make the most of the ones we had, and I prefer to roast my beans over steaming them. We now have a toaster oven that is also an air fryer, so it’s nice to not have to turn the big oven on for just beans, and the air fryer setting works great!

Normally I’d use plain olive oil along with some garlic salt and maybe fresh rosemary or basil if I have it. I’ve started selling infused olive oils made in New Hampshire at my shop, and they work great for roasting veggies! 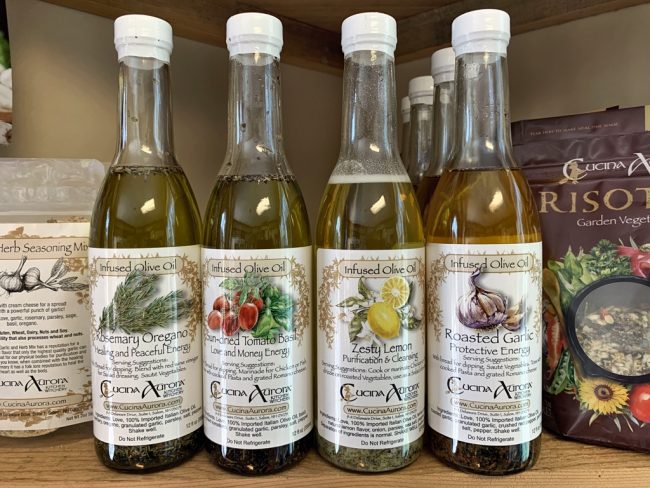 For the yellow beans I used the roasted garlic oil, and then I added a little fresh parsley from the garden as well! Farm dog Luke is the bean and pea king, and he even wanted to try a bean with some of the oil on it!

I don’t believe those things I hear about garlic or peas being bad for dogs. Quantities are important, but Luke gets fresh peas in his homemade food quite often. I believe that it’s not the peas that are bad, but processed foods that just happen to use pea protein to try to cheap out on their food.

I also trust that garlic is safe for dogs in moderation. I trust Only Natural Pet and if they sell this product, which Luke takes during insect season to help repel the bugs and is good for his skin, then I believe it’s safe and healthy for Luke.

Anyway, I digressed, didn’t I? 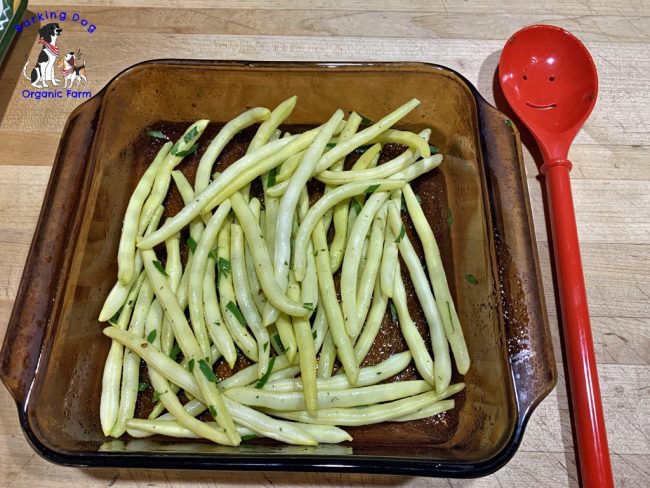 Snap the ends of the fresh beans, brush a little of the oil on the pan, then add the beans and top with more oil and some fresh parsley. I don’t measure, I just guesstimate! Start small and once you’ve stirred if the beans look wet, you’re good. You can always add more. There are plenty of herbs in the oil, but I just like to add some fresh ones! Stir it up and air fry for 15 minutes at 400 degrees. What could be easier? They come out soft enough to make my hubby happy and with just enough crisp to make me happy. Luke will eat them either way, he’s not fussy like the humans!

You can find the infused olive oils from Cucina Aurora at my shop, in the 4 different flavors seen above. We’ve tried all but the Zesty Lemon (lemon and other citrus can give me a migraine). We use them on veggies, fish, and in pasta. My sister suggested adding a bit to my scrambled eggs, and wow, that was SO good too! If you don’t live local to my shop, you can find them online at cucinaaurora.com.

I also have green beans and other veggies from Sunset Harvest Farm in Enfield at the shop, along with farm fresh eggs from our own Barking Dog Organic Farm. Sorry, none of that is available online! 😊