In over 20 years of having both dogs and cats, we have never had any problems that I can remember.  The dogs would sometimes chase the cats, yes, but they were always scolded and would stop.  I think our cat Katie used to instigate them by purposely running so they would chase.   She would then stop dead in her tracks, turn towards them, and the dogs wouldn’t know what to do then!

When we brought Luke home as a puppy, he and our cat Samantha became fast friends, and he’s always been fine with Conrad.  But as he grew larger, I think he got to be just a bit too rambunctious with Sam and she is less impressed with him.  She tends to keep her distance from him or to at least get up high out of his reach.  If he went after her, it was all in wanting to play.  We do still occasionally see her batting at his nose though, never using her claws.

The first time I remember noticing any issue between those two was quite a while ago when Luke was younger.  Samantha was lying on the window seat in our bedroom, and Luke started barking and barking at her.  It was almost like he didn’t recognize her, maybe she was in a place he hadn’t seen her before and with the light behind her he couldn’t see her clearly.  He eventually settled down, realized it was Sam, and all was fine. 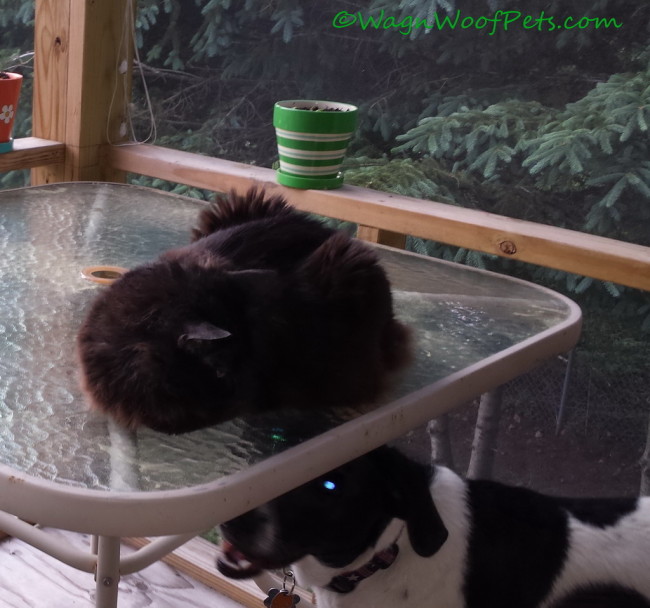 There have been other times Luke didn’t recognize someone and reacted by barking.  We sometimes joke that he barks first and asks questions later.  There’s been times that he’s even barked at us when we came in a room, maybe carrying something, and he didn’t instantly recognize us.  But he doesn’t seem to have an eyesight issue, though we wondered about that.  He can catch a ball midair no problem and shows no other signs of not seeing well.  As soon as we’d speak to him, he’d be fine.  Often when people come to our house, he’ll bark at them even if he knows them.  Once he gets close enough to get a sniff of them, he is OK.  It seems like he uses his sense of smell to recognize people more than his eyesight.

Those episodes are few and far between anyway, but a new issue arose recently when Samantha had escaped outside.  Sam has been an indoor cat only her whole life but she lives to escape when she can, especially when the weather gets nice.  She is sneaky and lies in wait for the dogs to be going in and out, and then she makes a run for it.

But when she comes in the house smelling like the outdoors, both Luke and Cricket will chase her, and Cricket will track where Sam’s been using her beagle bark/whine the whole way.  She’ll stop when she actually gets to Sam though, if she even does.  But recently Luke went after Sam like he didn’t know her.  It wasn’t his playful biting at her, it was a snarly bark and scared the heck out of me.  Sam was on the kitchen counter at the time right next to me, and she never even moved.  That makes me feel he didn’t actually try to bite her, and he scared me more than he scared Sam!  When I yelled at him, he did stop.

It’s happened more than once now though, and we separate them and leash Luke if needed, if Sam has gotten outside.  She will go off to one of her hiding places and when they meet later, Luke is fine.  I feel like the outdoor smell wore off.

When we took both cats to the vet recently, I warned my hubby that the cats were probably going to smell funny, and Luke would act out again.  So we brought both cat carriers into the kitchen and kept the doors closed to see what would happen.  Both Luke and Cricket furiously sniffed those carriers (Sheba had little interest), and sure enough after a few minutes Luke started barking at Sam in the crate.  Curiously enough, he did not bark at Conrad even after we let Conrad out.  So we put Luke outside when we let the cats out, and when we did let him in, I put him on a leash.  He was going to go after Sam again, so we sent her upstairs, closed the gate, and later again they were fine. 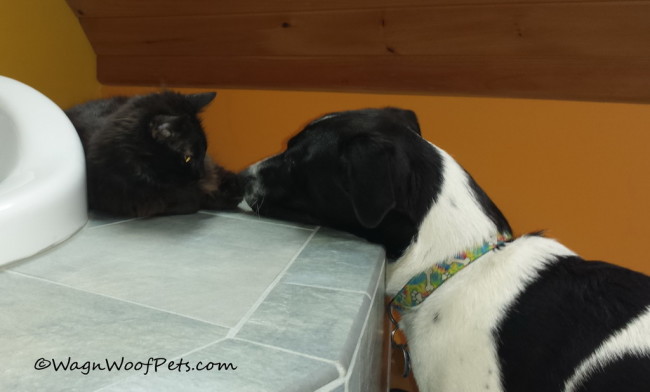 I did a little research on dogs chasing cats and did read that sometimes dogs will chase their own cats when outside.  If a cat runs that just winds up the dog more….Sam does sometimes run from Luke, but other times she does stand her ground.

Obviously, this has to do with how Sam smells when she’s been outside.  The easy answer is to not let her get outside!!  The last time it happened was our fault of course.  We finally had a nice day on Sunday so my hubby was opening windows and cracking doors to let fresh air in.  I was going around behind him closing the windows to only a crack that Sam couldn’t fit through.  But we both missed the sliding door that we had opened just an inch or two.  Sheba was outside, and she can slide that door open with her nose!  Sure enough, Sheba let herself in the house, and Sam let herself out.

From now on, for the times the humans are stupid or slow, Luke will be leashed when around Sam when she comes back in, and we’ll also have to be careful not to let him outside if she’s out there.  She’s pretty good at getting away from the dogs so far, but we are not taking any chances (she can get out of the fenced in yard, and we let her in the house another way).

I did some reading and we can also use the clicker and treats to hopefully distract Luke from Sam when this happens (he’ll still be on a leash of course).  As I said, this has never happened with Conrad, but he doesn’t get outside either, so the only time it might have was after he’d been to the vet.  But everyone ignored him.  The fact that he doesn’t run might also be a factor.

I wanted to share this story to see if anyone else has had a similar experience with their dogs and cats?   Are some dogs just far more driven by their noses than their eyesight?  I had been thinking of getting Sam a harness and taking her outside some, but now I’m thinking that might be a bad idea.  I also worry if we ever wanted to bring another cat home (not that we plan to at this point).