In a world that’s been anything but peaceful for the last year, it’s nice to sit back and simply enjoy the peace and quiet of winter here in New England. Even if it is starting to make us a bit stir crazy.

February seems to be starting out to be more cold and snowier than December and January were! I closed the shop due to large snowstorms once in December, opened late one day in January, and have already been closed once in February. There were also two snowy days when I came in, but business was quite slow! While it’s my preference to keep my hours consistent, it seems wiser to stay off the roads when they are bad, and I think most people feel that way as well. Don’t go out unless you must.

The worst part of the snow and cold is that we haven’t been able to get Luke out for walks consistently. We need to make new trails in the woods for him, so he doesn’t strain his knees too much walking in deep snow (for those that are new to us, Luke has luxating patellas in both his back knees; click here to learn more about that condition). Dad has been busy trying to keep up on snow cleanup and hasn’t had time to do that yet. My car keeps having issues and he’s been spending time trying to get that fixed too. 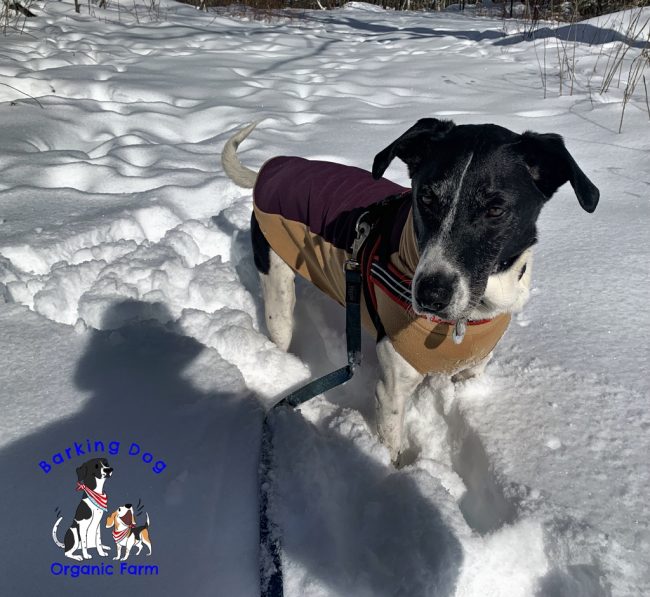 I took the photos above and below on a very short walk around the yard. If I’m being honest, that deep snow was harder on me than it probably was on Luke! I didn’t have time to dig out my snowshoes, but clearly, I need to do that! Luke was game to go out in it, and we followed deer tracks some to make it easier, but it wasn’t long before he was holding up his paws because they were cold; so, we headed back to the house, following our own trails.

We are all starting to feel a bit of cabin fever now, I think. Things are slow at the shop (not unexpectedly post-holidays) so I have more down time both there and at home. I’m not good at relaxing, I’d rather be busy! But I’m doing my best to enjoy the down time while it lasts; I’ve been doing more reading in front of the fire on my time off, with Luke by my side, or at least nearby – he sometimes prefers to lie directly in front of the stove!

We did have the distraction of trying our winter hatch of chicks in the incubator! Unfortunately, that didn’t go as well as hoped, and we ended up with just two new chicks hatching. Aren’t they the cutest though? Once again, we’re not sure what went wrong, and being the gluttons for punishment that we are, we are trying again! While it’s frustrating to watch and wait, especially those last three days when hatching should start, with little result, I decided to just focus on the two newbies, and not the disappointment.

We are trying something else new. Since having chicks in the house can be a messy endeavor (they create a crazy amount of dust!), we purchased an air purifier to see if that would help. Thank you to our friends at My GBGV Life for their review of one (you can read it by clicking here) recently; that’s really what put the idea in my head. We’ll let you know how that goes, or if we’ll be back to only hatching when it’s warm enough to keep them in the coop!

At least we can already see the days getting longer. The hens have upped their egg production recently, and they don’t coop up for the night quite as early as they did. We do believe that our young girl, Annie Oakley, has started laying, but we haven’t really caught her in the act so we can’t be sure! We’ve had some smaller eggs though and suspect those were from her. Their first eggs are often small.

While the flock is not impressed with all the cold and snow, they are doing OK! They spend more time inside the coop, or the garage when they are free ranging. If it’s sunny and a little warmer (which it hasn’t been much), some will wander over to the porch and sit in the sun for a while, mostly the guinea hens. It’s funny to watch them, because when they decide to leave, they’ll often fly back instead of walking in the snow. Guineas can fly much better than chickens, but oddly they often choose to walk instead.

While we wait for spring, or even just more moderate conditions outdoors, we’ll watch these two little cuties grow and wait for the next batch of eggs to (hopefully) start hatching! I need a project to occupy my time at the shop, so I have a new one I’m going to start soon. I’ll fill you in more on that once it’s underway.

How is everyone else surviving the winter? Are you enjoying the peace of it too, or is it simply too quiet?